Living in the North East of Scotland, we are very lucky to be the first part of the UK to become the winter home to flocks of the tufted and brightly tipped Bohemian Waxwings.

Bohemian Waxwings reside and breed in Scandinavia during the summer months where they will raise one brood of on average 5 or 6 chicks every year. As winter approaches some will migrate south when the population gets too big for the food available, to countries where food will be more abundant. Flocks of these stunning starling sized birds start to appear as early October in the North East of Scotland around Aberdeen and having seen lots of stunning photos and tweets about their location (@WaxwingsUK) we decided to go out and look for them!

We stopped at Allenvale Cemetery in Aberdeen on a very dull, wet day. After a good twenty minute wander around the grounds with no success we noticed a couple of others with large camera lenses and made our way over to them. As we approached we could easily see a group of twenty or so waxwings perched in a bare tree. 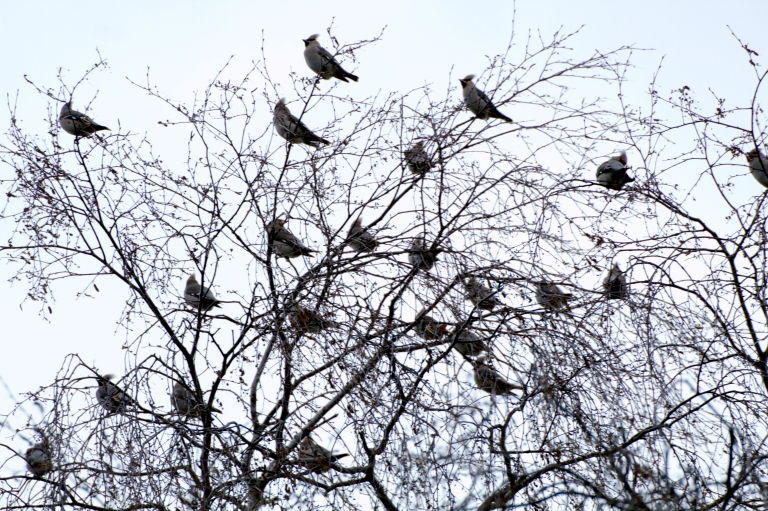 Waxwings are berry eaters, particularly Rowan berries, which are commonly found within cemetery’s across the UK. They do eat a variety of other fruits and also consume insects, mostly midges and mosquitoes but berries are definitely their favored food. 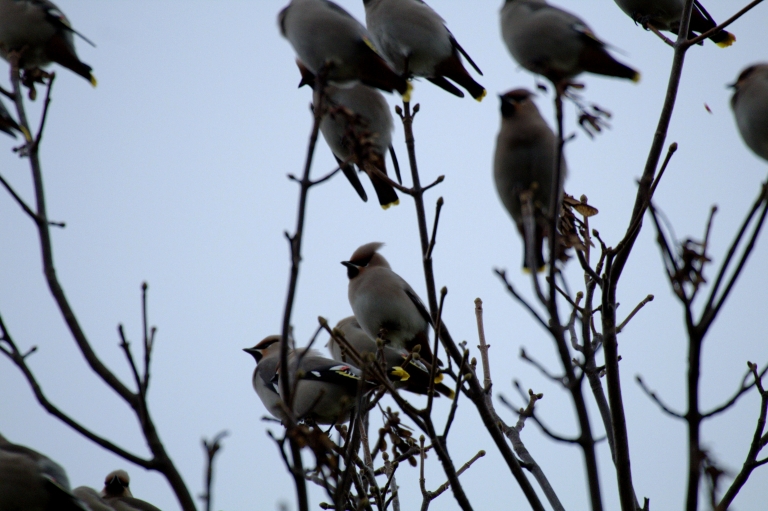 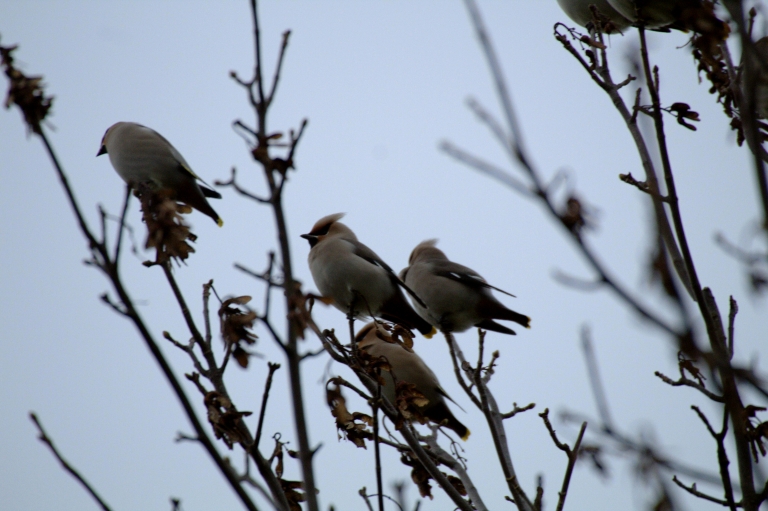 They were inactive for 10 minutes before they were scared off across the cemetery by a car parking. They were also very hard to photograph; very high up with little light didn’t make for the best photographs.

We stayed a little longer after the flock took off and had a further look around the area but couldn’t see them so decided to go looking for otters instead. Throughout the winter waxwings move further and further inland on the hunt for more food as larger numbers of them arrive so by December they can be spotted anywhere where there is sufficient food.

A few weeks later as I drove home from a morning watching a Kingfisher in Fife there was a flock of around 50 of them in another bare tree right by the road. I managed to stop slightly further up the road and walk back. This time they were almost at my eye level and a lot closer allowing me to take some close up’s although the light still wasn’t great. 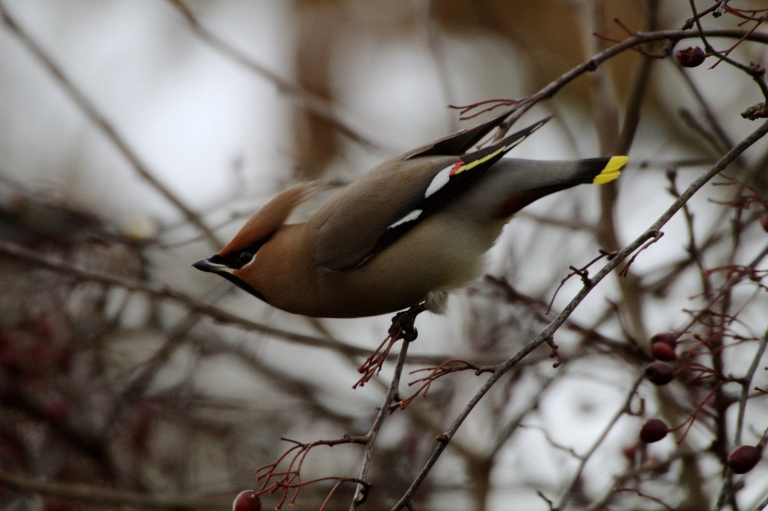 Waxwings get their name from the red tips on their white wing feathers which looks like a wax seal at the end of the feather. You can make out the red tips and the lovely yellow tail feathers above. 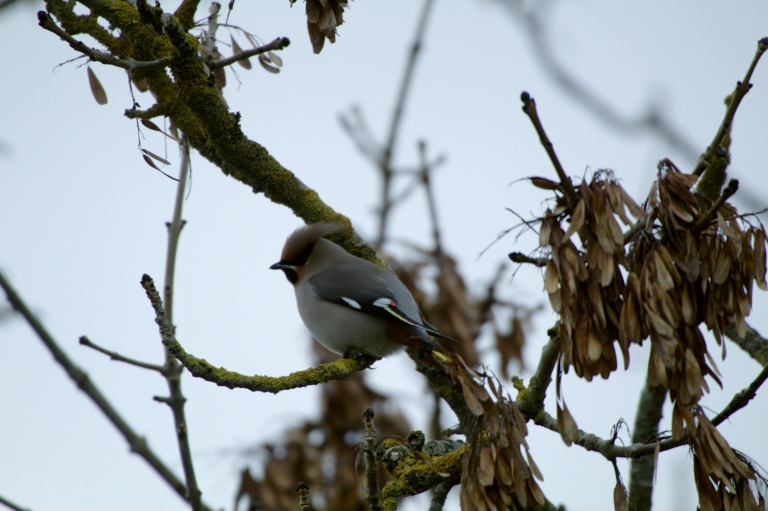 They were in the area as there was one bush full of berries right next to the road that they were after. Every time they landed on it a car would pass and they would fly off, circle back round and land at one of three trees close to the bush, make sure it was safe before descending upon the berry bush again to get their fill. It made photographing them difficult as I had to constantly move up and down the road between the trees and the bush but it was amazing to have a front row seat to watch them stuff their faces. 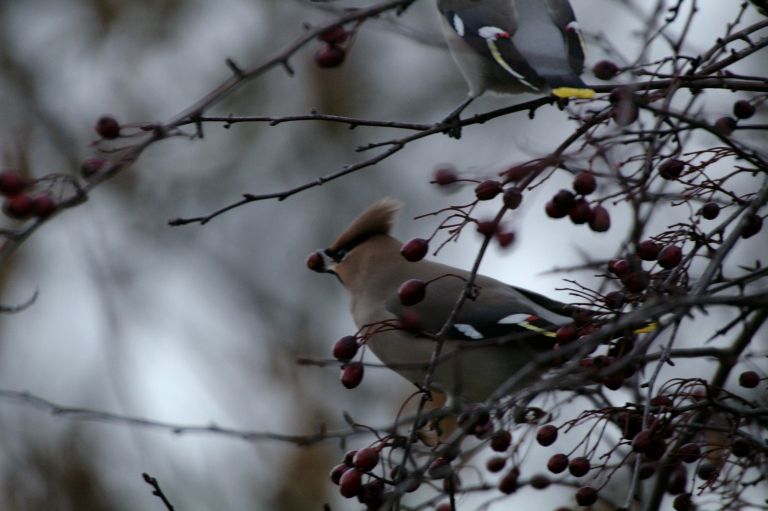 If uninterrupted they can consume huge amounts of berries. There have been numerous recorded sightings of individuals consuming hundreds of berries, more than double their body weight in a couple of hours! A lot of the berries, including Rowan berries, that Waxwings consume contain very small amounts of alcohol. When they consume large amounts of them in a small space of time it can get them drunk and result in the bird being unable to fly (sounds like Christmas!). 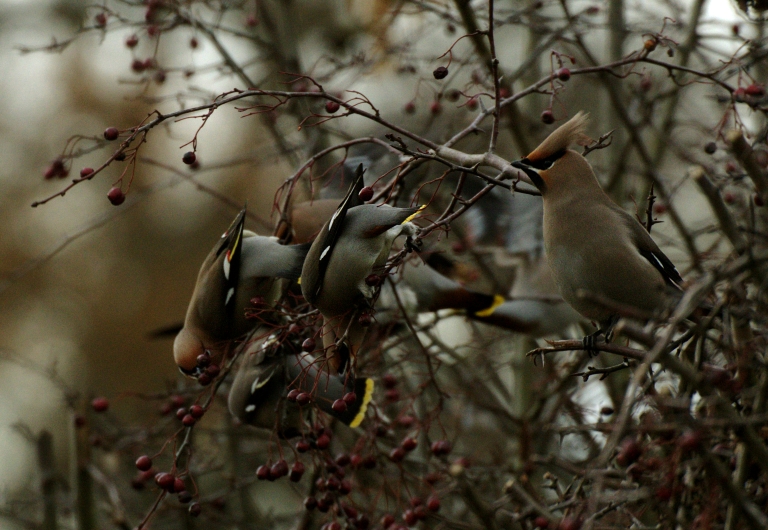 This bird was taking a break from feeding while others continued to clutter and demolish one branch. Shortly after this photo was taken the branch actually snapped as there were too many birds on it, the flock got scared from the noise and flew off again! When the food source is too small for the whole flock to feed on together they often split into smaller groups and take turns to feed.

Although this was an improvement on our previous sighting of Waxwings we still hoped to get shots of these birds in better light.. Eventually our perseverance was rewarded. One afternoon on our way home from the Tay Reedbeds we saw a large flock of birds fly straight into a tree directly in front of us on a clear day. Instantly being able to identify from their crests and colours we grabbed the camera;

The flock were patiently sitting in a tree waiting for a nearby berry bush which had two crows on it to become free. 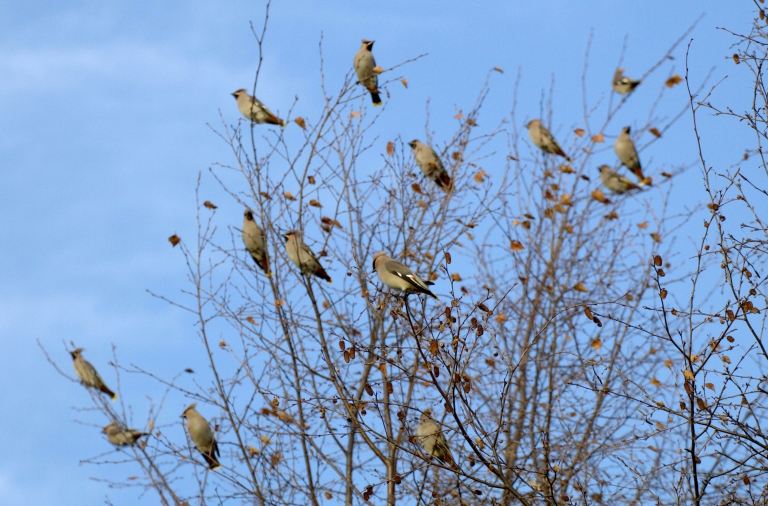 Every now and then they would all flock to the berry bush together but as soon as they landed on the bush the crows would immediately and loudly chase them off.

They would then return to the same tree and watch for their next opportunity..

After 3 or 4 unsuccessful attempts the flock decided to try elsewhere and flew off but we were happy to get a chance to photograph them in better light conditions but also just to stand and watch them.

We look forward to continuing to watch and photograph these birds in the future.

Our tips for watching and photographing these birds;

One thought on “Wintering Waxwings”

Back in 2016 we had the opportunity to go on a road trip driving up the east coast of Australia. Travelling from Melbourne to Cairns we were fortunate to have wild encounters with many of Australia’s iconic species, from watching Koala’s sleeping in a eucalyptus tree, seeing a duck billed platypus forage in the rain to this special evening spent in Kangaroo Valley watching wombats browse. Devastatingly many of the areas we travelled to have been ravaged by the ongoing bushfires and many of the animals we spent time watching, including this wombat, have likely been killed with an estimated 1 billion animals losing their lives to the raging fires so far. But all is not lost. The volunteers of @wireswildliferescue are working incredibly hard to treat and rehabilitate as many wild animals rescued or displaced by the fires as they can but they need your help to keep providing the care needed to an ever increasing number of patients. Please donate what you can through the link in our bio. - #bushfiresaustralia #wireswildliferescue #pleasedonate
Citizen-science on safari. • While in Botswana with @bushwaysbotswana we were incredibly lucky to encounter two different packs of Africa’s most endangered large carnivore. The African Wild Dog. • Painted Wolves, as they are also known, have disappeared from most of their former range due to the loss and fragmentation of suitable habitat as a result of the expanding human population. Most are now forced to live in small sub-populations which are particularly vulnerable to extinction. • But, through emigration and immigration sub-adults dispersing from natal packs can form new groups, rescue small sub-populations and recolonise unoccupied areas. • As such a collaborative project between the @university_of_zurich and the @botswanapredatorconservation is attempting to understand where and how wild dogs disperse and the connectivity between populations. • Combining GPS data from collared individuals with sightings, particularly photographs, from tourists and guides helps to identify movement patterns, habitat use during dispersal, settlement success in a new territory and reproductive success of dispersing sub-adults across large landscapes (even international boundaries) which be used to inform management plans vitally important to the conservation of this highly endangered species. • Watching a pack of wild dogs play, tussle and nap was magical, knowing that our submitted sighting may help contribute to their conservation makes it even more special. • #wilddogs #paintedwolves #botswana #citizenscience #conservation #followme
One of the many, many reasons I love visiting the #Cairngorms , the coal tits of RSPB’s Loch Garten reserve. • Turn up your volume to hear the sound of their wings in slow motion. • #loveithere #feedingthebirds #cairngormnationalpark
Evening traffic in Botswana’s Chobe National Park. • Looking forward to sharing more, photos, videos, thoughts and maybe even a blog post from our week camping in one the wildest places on Earth with @bushwaysbotswana back in September. • #Elephants #Botswana #chobenationalpark #africa #safari #followme