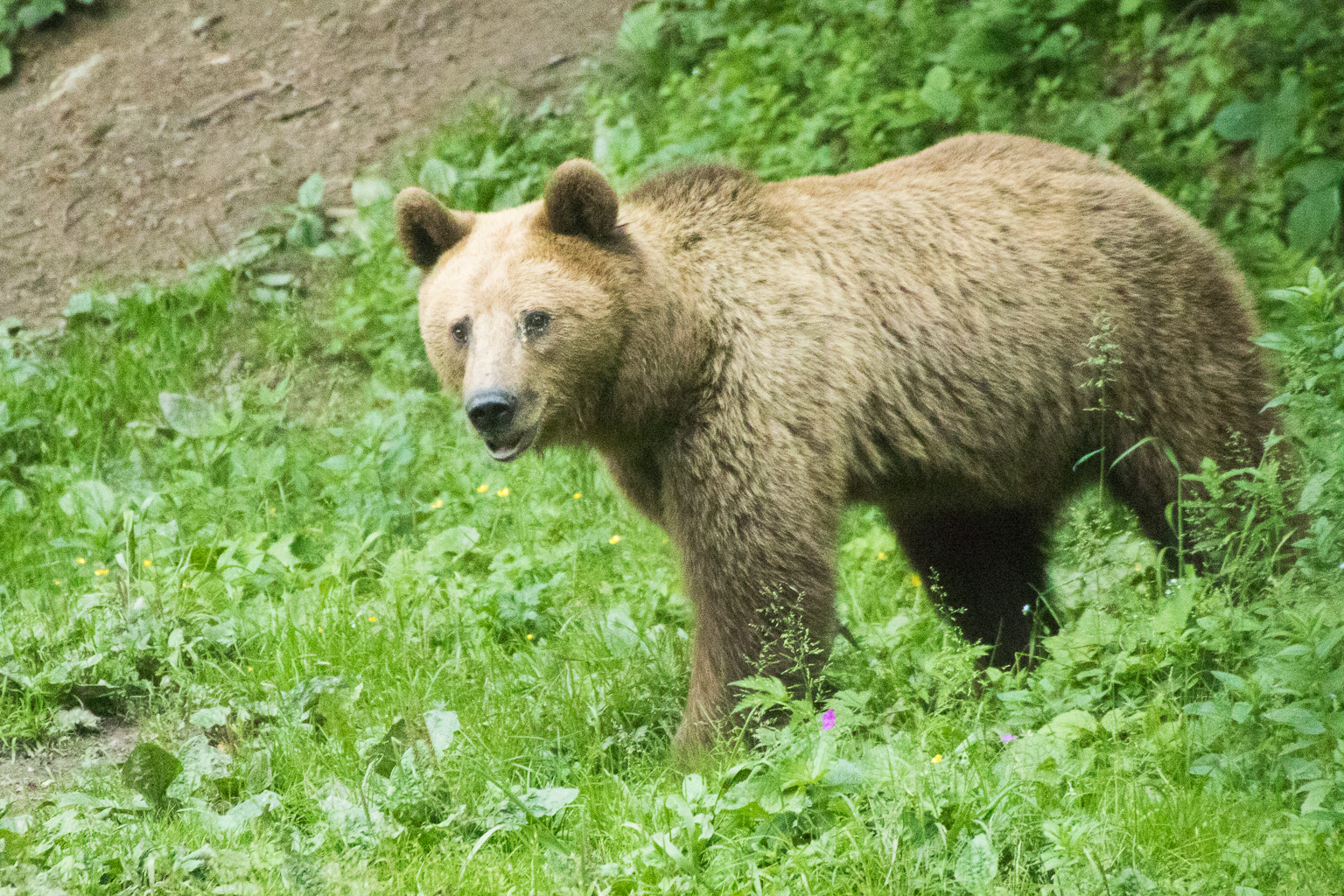 A female European brown bear turned her back on us and began to make for the tree line with her two young cubs in tow.

Not exactly the best start for an evening of bear watching and certainly an unlikely scene in our native Scotland.

In fact we were in Romania, an almost mythical land of vampires and medieval castles but also home to 60% of Europes wild bear population.

Of course it was the density of bears that had lured us here in the first place to where the seemingly never-ending thick, dark green forest of the Carpathians meets lowland and the city of Brasov.

With a week at the end of June where we were both free we had been researching our options for a short holiday; the Shetland isles, Finland or Northern Spain. In each the promise of excellent wildlife encounters and good weather or beautiful beaches. But of course I read the 60% of Europes bears statistic and that was it; Romania bound we were.

Since visiting the National Parks of Montana in the U.S. a year previously these huge animals had captivated our imagination. Bears are symbols of the wild and they seemed almost metaphorical for the wilderness we lack in the UK.

And now we were surrounded by them. Signs of bears were everywhere throughout our 30 minute trail to the hide. Massive water-filled paw prints were deeply imprinted into the forestry path we followed, fresh berry and bone filled droppings a regular occurrence on our walk and occasionally the odd tuft of bear fur could be seen on a nearby tree where an unreachable itch has been scratched. 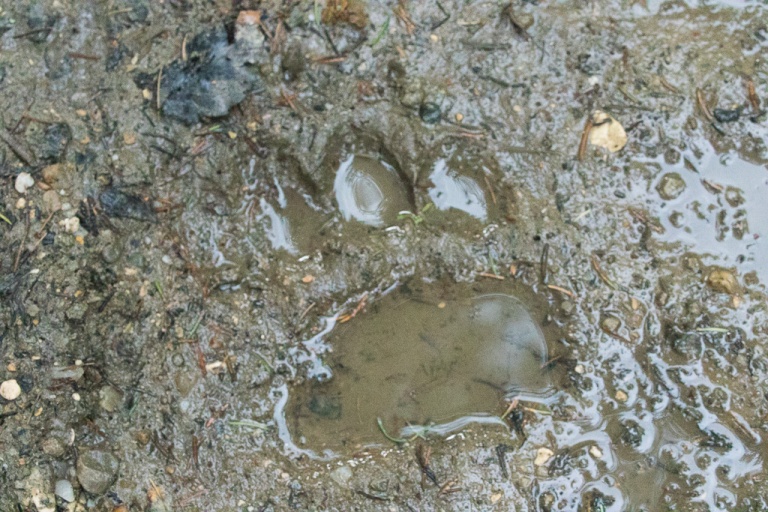 With the mum and cubs gone and only a young male who’s head was firmly stuck in a hollowed out log gorging on sour milk that was laid out for him our guide Cosmin, an ex Romanian government wildlife manager turned wildlife guide, takes the chance to explain the reason for Romania’s bountiful forest and abundance of native wildlife;

The communist regime that began in Romania in 1947 had the unexpected side effect of protecting much of Romania’s forests and wildlife. Hunting of big game was not allowed by anyone apart from Nicolae Ceausecu and his invited guests until 1989 which allowed Ursus arctos arctos to flourish as well as other predators typically persecuted throughout Europe like European wolves and Eurasian Lynx.

Cosmin explained that the population around Brasov today is reasonably high with around 60 to 65 adult bears with territories in the immediate surrondings of the city. Although such numbers are indicators of a healthy forest it inevitably leads to human conflict as bears occasionally wander into or through the city on the valley floor between densely forested mountains.

This informative monologue is abruptly interrupted by excited noises from members of our party as another bear emerges from the forest into the clearing. She is not alone.. 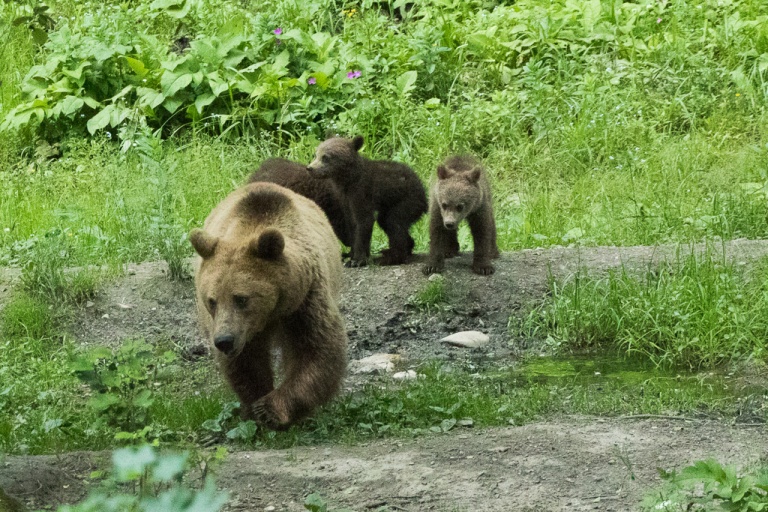 Cosmin recognises the mum, she is an irregular visitor to this hide but this is the first time he has seen her with cubs who are all very small, leggy and playful.

We sat for over 30 minutes joyfully watching the bears and cubs that were assembled before us taking pictures and videos before eventually settling down to just watch and take the scene in. Around 8.30pm Cosmin beckoned us up from our reverie and we had to leave the hide (with active bears still present) and walk back down to roadside, our eyes picking out every shadow in the forest as we went.

Although commercial hunting of bears was banned by the Romanian government in 2016, illegal hunting and loss of habitat pose the greatest of threats to these animals.  And with Romania’s economy rapidly expanding it’s wild places and vast stretches of forest will likely suffer from pressure to develop the land.

With the recent news that we are currently living through Earth’s sixth mass extinction event as a result of human destruction the level of biodiversity in Romania is rare and precious. Let’s hope that the Romanian government learns from where others have failed, like the UK, and continues to promote itself as an eco-tourist attraction for people to come and watch bears, in turn helping to protect them.

Currently reliving many incredible memories of watching the world’s largest mammal and dreaming of returning to Botswana. #WalkingWithElephants #Botswana #AfricanElephant #safari #takemeback
Traditionally an incredibly unpopular weed, Dandelions are one of the first flowers to bloom in spring and are an important early source of both nectar and pollen for bees, beetles, butterflies and hoverflies. So why not create a pollinator paradise in your garden by leaving a patch un-mowed where the ‘weeds’ can grow. #dandelions #pollinators #gardenwildlife #rewilding
At the weekend we put sheep’s wool out on a spare bird feeder. Within 10 minutes we had visitors collecting material for their nests! Putting nesting material out is a great way to encourage birds to nest nearby or in the nest box in you’re garden. #bluetit #gardenbirds #breedingseason #followme
Earlier this week we found this tailless common lizard basking in the garden. One of only six species of reptile we have in the UK. When threatened by a predator these scaly reptiles shed their still-moving tail in order to distract their attacker and make a quick getaway. It’s tail will regrow but it will be much shorter than the original. #Reptiles #wildlifephotography #Scotland #Lizard #followme