Many times over the last few months I’ve hoped to spot one particular bird among the snow. I’ve repeatedly climbed up steep peaks , embraced the bitter cold and battled through the occasional snow storm, but to no avail. The Ptarmigan, a mountain specialist, with pure white plumage has evaded me. The closest I’ve seen is foot prints in the snow.

These trips up the to the highest snow capped peaks of the Cairngorms have not been wasted journeys however, far from it. The frustration felt at my inability to find the ‘snow grouse’ among the scree has been replaced by wonder from encounters with other winter specialists.

The wattle of the Ptarmigan’s cousin, the red grouse has become as familiar as the wind whistling through the Glens. Seeing them waddling through snow covered heather and picking at it is a pleasing and slightly comical sight. 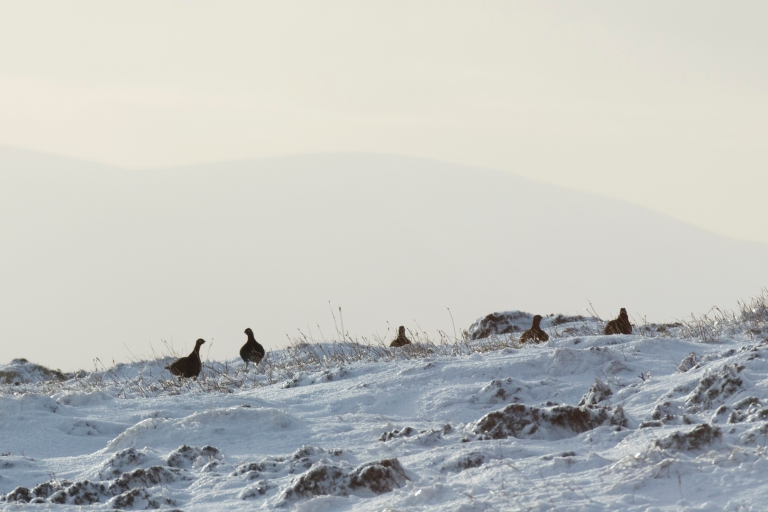 The resident Mountain Hares have made it difficult throughout. Their beautiful coat and trusting demeanour repeatedly made me question why would I want to continue up a steep slope when I could find a cosy corner out of the wind and wait for our native lagomorph to pass by or join me in my corner.

And on a day when the weather has been just right the views down the Glens and across the Cairngorm range have been spectacular, alone they are worth climb.

But by far the most endearing encounters have not been on the slopes but, in my mind at least, have occurred in the most surprising place. The car park. The small piles of grit swept to the side and occasional bit of dropped food brings in scavengers looking for an easy meal.

The largest of the bunting family Snow Buntings are the only songbird in the world, of which there are roughly 4,000, to have been recorded at the North Pole such is their northernly nature.

They migrate here for one reason. Food. With their Artic breeding grounds frozen over they migrate to more temperate regions in winter in search of seeds or small insects to feast on, aiming to increase their body mass by up to 30% for the breeding season ahead.

With some patience, their trustworthy nature will allow you to get incredibly close to observe and photograph their natural behaviour. You quickly realise they are just as fascinating to watch as they are cute.

Fluttering into land beside a number of salt piles they choose to explore the area by running across the snow rather fly. Their tiny feet almost a blur as they pass with a slight head bobbing motion.

As they do, they keep in constant communication with each other. Constant chirps are sent between individuals and by sticking together in their ‘drift’ they stay in each others eye line and react to one another’s movement. When one begins to settle and rest the other members soon follow suit.

But when an excited dog takes a little too much interest in the scuttling buntings, one takes flight to safety and without a giving off a warning call the rest immediately take note and take to the sky, landing further uphill for a short while before returning to continue exploring from where they literally left off.

Snow Buntings are an amber listed species in the UK.  15,000 individuals over winter here at the southern most point of their range,but only 60 pairs stay over the summer for the breeding season, the rest return to the Artic.  Reliant on our already small areas of tundra it might not be long until these charismatic little birds no longer visit our mountain tops.

With rising global temperatures its predicted that the habitats the Buntings require will shift even further up hill. Given that these little birds already reside on Scotland’s highest peaks and plateau’s.  Soon there may be nowhere for them to go.

With more trips to Scotland’s snow capped peaks planned throughout February we will travel knowing that no trip will ever be wasted while these little beauties continue to walk, run and jump around the car parks.

Currently reliving many incredible memories of watching the world’s largest mammal and dreaming of returning to Botswana. #WalkingWithElephants #Botswana #AfricanElephant #safari #takemeback
Traditionally an incredibly unpopular weed, Dandelions are one of the first flowers to bloom in spring and are an important early source of both nectar and pollen for bees, beetles, butterflies and hoverflies. So why not create a pollinator paradise in your garden by leaving a patch un-mowed where the ‘weeds’ can grow. #dandelions #pollinators #gardenwildlife #rewilding
At the weekend we put sheep’s wool out on a spare bird feeder. Within 10 minutes we had visitors collecting material for their nests! Putting nesting material out is a great way to encourage birds to nest nearby or in the nest box in you’re garden. #bluetit #gardenbirds #breedingseason #followme
Earlier this week we found this tailless common lizard basking in the garden. One of only six species of reptile we have in the UK. When threatened by a predator these scaly reptiles shed their still-moving tail in order to distract their attacker and make a quick getaway. It’s tail will regrow but it will be much shorter than the original. #Reptiles #wildlifephotography #Scotland #Lizard #followme